How Many Data Points Constitute a Trend?

It’s a question that has been on my mind since writing about an additive manufacturing (AM) production business called 3rd Dimension Industrial 3D Printing near Indianapolis. That story, which was published this past May in our sister publication Additive Manufacturing, is about CNC as a business strategy for additive manufacturing. The basic premise is this: The owner’s decision to purchase a fully stocked machine shop and locate it under the same roof as its printing facility may have benefits that extend beyond simple cost savings during the post-processing phase of 3D-printed metal parts.

Just before writing about 3rd Dimension Industrial 3D Printing, I had written about Lincoln Electric’s new additive manufacturing division, which tread similar ground. That story began in the summer of 2019 with a tour of Baker Industries, a subcontract manufacturer located near Detroit that primarily serves the OEM and Tier-One aerospace and automotive sectors. I wrote about Baker’s colossal VMC, an Emco Mecof PowerMill that features a 52-by-20-by-10-foot XYZ work envelope, and touted the company’s experience with uniquely complex setups and programming for extremely large CNC-machined parts. 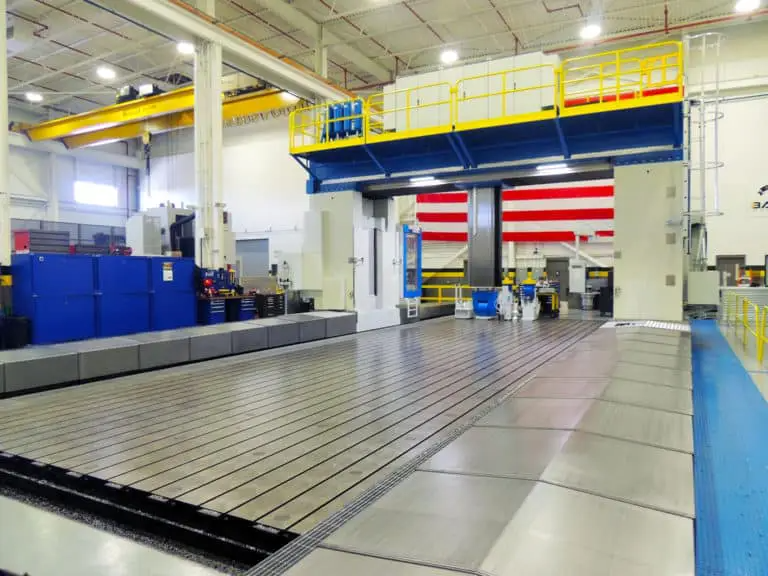 The Emco Mecof PowerMill represents a $3.4 million investment by Baker Industries, which was acquired in 2019 by Lincoln Electric to machine large 3D-printed parts.

At the time it seemed slightly odd that a representative from Lincoln Electric, the 125-year-old global manufacturer of welding equipment, was seated at the table with several Baker employees. While Lincoln Electric had recently acquired Baker Industries, the nature and purpose of that transaction was not clear — at least not until months later when I toured and wrote about Lincoln Electric Additive Solutions. That article focused on the wire arc additive manufacturing process that Lincoln uses to print several large parts such as tooling for composite aerospace components — a process that includes the challenge of finish machining these large parts. The acquisition of Baker Industries, located near Detroit, was Lincoln’s answer to this challenge.

So, how many data points constitute a trend? Clearly the answer is more than two. While we’ve written several articles about the relationship between job shops and 3D printing, the cost and supply chain benefits of having both production additive manufacturing and CNC machining capabilities within the same company feels like it is becoming more widely understood.

In the interest of completing the journey that started at Baker Industries, I reached back out to the company to talk about how things have changed since being acquired by Lincoln Electric, and to discuss the benefits and challenges of machining large 3D-printed parts. 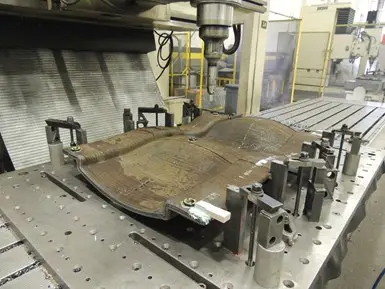 Lincoln Electric’s printing process combines automated metal inert gas (MIG) welding or laser hot wire welding with direct deposition 3D printing. To get the basic idea, picture a welding torch depositing bead layers of melted wire feedstock onto a multi-axis turntable. The company is finding success printing large, asymmetrical facesheet tools for aerospace composites that can measure more than 6 feet in length and weigh over 900 pounds. These tools often take months to manufacture traditionally, not only because of the availability of raw materials such as Invar, but also because facesheet tools require significant amounts of time to fabricate and machine on CNC machines large enough to handle them. With the launch of Lincoln Electric Additive Solutions, the timeline for printing these parts can be a matter of days, not weeks, after which they are shipped a couple of hundred miles to Baker Industries for finish machining.

“We’re probably one of the only companies in the world that can handle both large-scale printing and machining right now,” says Bill Ednie, Operations Manager at Baker Industries. Mr. Ednie says that since Lincoln Electric acquired Baker in 2019, the number of 3D-printed parts that its additive business delivers for finish machining operations is beginning to ramp up. From a pure machining perspective, Mr. Ednie points to several differences between 3D-printed and traditionally manufactured parts.

The massive amount of stock that needs to be removed from a billet large enough to produce a large facesheet via machining alone creates an incredible amount of heat. Residual stress from the heat of machining often results in parts warping or twisting during the process. Contrast that with the large printed parts Baker receives from Lincoln Electric Additive Solutions, which do not require roughing or heavy cuts — only finish machining. The amount of stock that needs to be removed is minimal, resulting in much lower chances of warping and shifting. 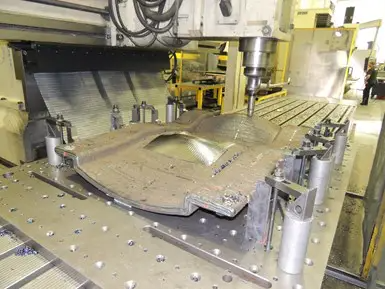 That same 3D-printed facesheet after machining operations have begun at Baker Industries.

Workholding strategies for large machined parts can pose challenges for even the most experienced machinists. Mr. Ednie contrasts this with 3D-printed parts by pointing out a central advantage: “We can put the workholding wherever we want,” he says. “We can add to a design to make the additive part exactly how we want it. We can add workholding structures wherever we want to hold the part.” He says that Lincoln Electric Additive Solutions and Baker are in constant communication about issues like this, and the end result is a net savings on...

Beyond the massive amount of time saved by printing facesheets rather than waiting months for materials, the 3D-printed facesheets from Lincoln Electric Additive Solutions achieve a finished state much more quickly than traditionally manufactured parts. “And you can cut more intricate parts because there's not as much stock,” Mr. Ednie says. “Sometimes when you have heavy stock in corners and very deep areas, the cutter tends to deflect or chatter. With a lighter amount of weld, you don't tend to deflect or risk chatter as much because there's not as much stock to remove out of corners. It reduces machine time quite a bit.”

As a leading supplier of welding equipment and accessories, it is no surprise that Lincoln Electric Additive Solutions purchases raw material, draws the wire and spools it for typical welding operations. Now that this material is available for its 3D-printing operations, it means that a part requiring enough volume of material to print hundreds of pounds at a time only requires a trip down the street to the Lincoln Electric headquarters. 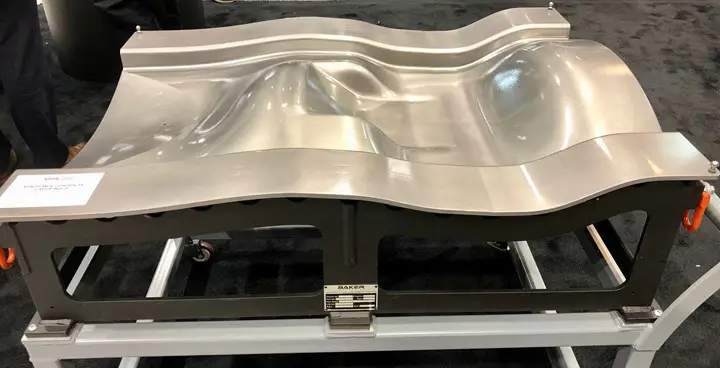 The finished and assembled facesheet, which took eight days to print.

There, the operations crew can draw and package the feedstock and obtain, say, a stainless steel in an alloy that couldn't normally be procured in that volume. Once operations move to Baker for machining, “we're reducing the schedule for our customers significantly,” Mr. Ednie says. “You're not waiting a few weeks to receive materials in and weld them together. You've already hit the ground running the day the order is issued.”

Mr. Ednie points out that after machining is finished for parts like the facesheet, there's still quite a bit of work to be done before they are fully functional and ready. Rather than send parts back to Lincoln Electric, Baker Industries handles assembly, quality control, laser inspection, fabrication, painting and (because these are aerospace parts) the certification process before selling and shipping parts to the customer. Mr. Ednie says that he believes these capabilities put the company in a unique position for the markets it serves.

“It is very rare to find tooling suppliers that will do in-house large-scale 3D printing and large-scale machining,” he says. “We believe we're a couple of steps above any one similar to us because our team can do everything here from A to Z. From printing in Cleveland to finish machining near Detroit, then straight to the vendors.” 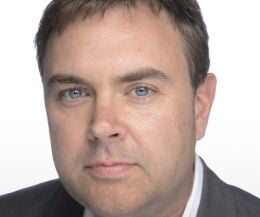 Brent Donaldson is senior editor for Additive Manufacturing Magazine and Modern Machine Shop, specializing in long-form feature articles related to machining and all-things-AM and industrial 3D printing. Before joining Gardner, Brent was editor-in-chief of Northern Kentucky University Magazine — at the same university from which he received his journalism degree in 2005. Brent previously served as associate editor for Cincinnati Magazine, and is the recipient of two Ohio Excellence in Journalism awards for feature news writing, Cincinnati Society of Professional Journalists awards, and more than 40 individual awards from the Council for Advancement and Support of Education for writing and editorial. Fun fact: Brent was the last journalist ever to interview Evel Knievel.

Most companies that embrace additive manufacturing (AM) have AM champions—one or more employees who see the potential of 3D ...
Start Reading
Peggy Malnati 2/17/21 12:00 AM 13 min read

Baker Industries Featured On the Cover of Manufacturing Today

Brothers Scott and Kevin Baker co-founded the Macomb, Mich.-based company as Baker Duplicating in 1992. The company started as ...
Start Reading